Researched and written by Carl and Molly Winters 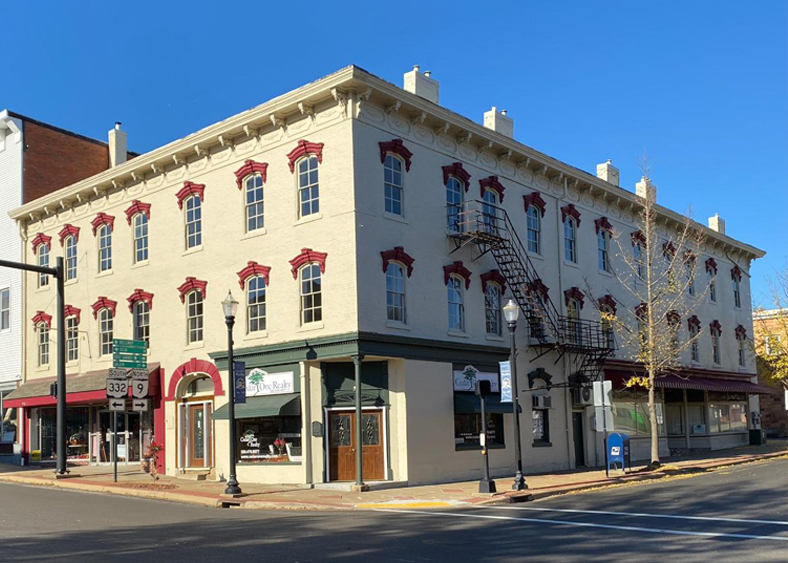 In 1826 on the north bank of Honey Run which ran down the center of what is now Carrollton’s Main Street, James Sinclair began construction of the second brick building in Centerville. He and his wife, Eliza, arrived in America from Northern Ireland with their four children determined to open a general store in Wheeling. Finding little opportunity for starting their business in either Wheeling or in Steubenville, on the advice of an old neighbor from Ireland who lived in East Springfield, Ohio, the Sinclairs moved further west to Centerville where they purchased John Champer’s general store in 1823.  Their new building was to be a two story Federal style structure, not unlike the McCook House which stands at the top of Carrollton’s town square. The general store was successful and they were very active in the new community. James Sinclair died suddenly of typhoid fever in 1838, leaving Eliza and their expanded family of twelve children with the business and the partially completed building.

With his purchase of the building and expert management of the Western Exchange, Richard Legget found financial success, but by 1854 he had become anxious to move west to Iowa. Around this time many people from the area were heading further west to new lands and new adventures.  Legget was willing to take a loss on the sale of the Sinclair building to pursue his dream to relocate to Iowa, where he and his family moved in October of 1855 and established a very successful hotel business. Kendall Jackson also succumbed to the urge to “Go west young man, go west” and although he was in his 50’s, Jackson headed to the gold fields of California in the early 1850’s. He returned to Carrollton in August of 1857 in poor health and died a few months later.

James Patton had successfully operated the Patton House in the former Indian Queen Hotel after Kendall Jackson had answered the call of “Gold Fever.” He sold his interest in the Indian Queen building, purchased the Sinclair building, remodeled the hotel, and reopened the former Western Exchange as the new Patton House. It became a first rate hotel, hosting many weddings and weekend gatherings.  Patton continued operation of his Patton House through the Civil War, retiring in 1866 to take up farming and harness making.

For a brief time the building was owned by Charles Swift who had moved from New York to Carrollton in 1866 with his parents and siblings. This young Civil War veteran held the ownership for six months and sold the building in June of 1867, walking away with a $1000 profit.

Daniel Van Horn purchased the Sinclair building in 1867 after operating the Sherman House Hotel with his father-in-law in the Jenkins Building, where the Virginia Hotel and Restaurant are located today.  Daniel and his wife Eliza added fourteen rooms to the original building and renamed the hotel the Van Horn House. In 1880 the Van Horns hired John Byder, Carrollton’s premier builder and architect of the time, to design and oversee a major renovation. A third floor was added to the original two story structure and a three story addition along the Lisbon Street side was built with more sleeping rooms and a ball room. The ball room became the site of many large receptions, weddings, and parties.  It was advertised that the Van Horn had 56 rooms, all with windows and cross ventilation, and a dining room that could accommodate over one hundred guests. The Federal style was changed to Italianate by adding bracketed cornices, paneled friezes, and two-over-two double hung sash windows with decorated arched lintels. Guests coming by train to Carrollton for excursions were met at the depot by carriage with service to the Van Horn. The hotel was very successful, attracting guests from all the surrounding counties with its first class accommodations and service.

Sadly, Eliza, whose force of character and talent in business had been so essential to the success of the Van Horn Hotel, died at the early age of 42 in 1882.  Daniel and the hotel never recovered from that loss. Although he remarried and hired competent managers for the operation, the hotel headed into a period of decline. In the early 1890’s Daniel abandoned his family and moved to California.  His wife was awarded a divorce and the building was sold.

From 1894 to 1900 the Van Horn building was owned in shares divided among three attorneys who continued operation of the hotel and rental of the ground floor storefronts.  The attorneys sold the building in 1900 to the newly formed First National Bank who located their office in the first floor corner location.  The First National merged with the Cummings Bank to become the Cummings Trust Company in 1906 and the Cummings Trust Company became the newest owner of the Van Horn building.  Under this ownership, the hotel operation ended.  The last to manage the Van Horn House, Mr. Samuel Simpson, served his guests an elegant chicken supper on the last night of the hotel’s operation. Soon after, the furnishings were sold and the dining room was remodeled into a business rental.  The second and third floor rooms were altered into club rooms and offices.

John L. Heiniger purchased the Van Horn building in 1919; however, the corner rental that housed the Cummings Trust office was not included in the sale.  This corner room remained a separate property for over 100 years. It was called Carrollton’s first condominium.  In 1920 the Cummings Bank moved into its new building across Main Street, keeping its loan office in the Van Horn for another year.  In 1921-1922, the corner store property was purchased by Allen Johnston who opened the City Meat Market.  Allen was later joined by his son, Joe, and the market sold the finest meats for 66 years until Joe’s retirement in 1987. Ownership of the corner property stayed in the Johnston family until the present owner reunited the corner room with the rest of the Van Horn in 2020.

Heiniger, who had also purchased the building on speculation, sold it to Homer Richards two years later. In 1925 Richards sold the building to his occasional business partner, T. J. Saltsman, the president of the Cummings Trust, and immediately rented the building from Mr. Saltsman and managed the rentals.  From 1925 to 1990 the Van Horn building was owned by the Saltsman family. During those years the first floor storefronts were rented, the second floor areas were the meeting rooms for the Civic Club and later the Rotary Club, while the third floor was occupied by the International Order of Odd Fellows. Carl Saltsman and John K. Saltsman, grandsons of T. J. Saltsman, worked for over four years to have the Van Horn placed on the National Registry of Historic Buildings in 1987.

The Van Horn building was sold to Richard Hannon and John Baker in 1990 after which the second and third floors became vacant but the ground floor rentals remained occupied.

Randi Bake purchased the Van Horn building on May 20, 2019 and the corner property that houses Cedar One Realty on September 24, 2020 and is restoring this Grand Carrollton Landmark to its previous glory.